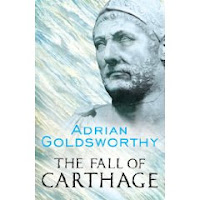 Ever since reading the Fall of Carthage: The Punic Wars 265-146BC by Adrian Goldsworthy a couple of years ago I have been keen to wargame this very interesting and colourful period of ancient history. The Punic Wars spanned decades as two major superpowers struggled desperately for dominance in the Mediterranean. Its a period of history that has everything a wargamer could want; interesting characters, high drama, empire building, tactically diverse armies and a multitude of classic battles which are still studied for there tactical principles today.

With my 6mm Napoleonic project now well on its way to completion, and having received the latest edition of Ancient Warfare magazine (highly recommended if you have the money by the way) which focuses on the doings of the Barca family during the wars, my interest in this period has been re-ignited. Some of the excellent illustrations in the magazine reminded me

how ethnically and culturally diverse the armies where with a large percentage, if not the majority of the armies fielded, being made up of a mix of client states, allies and bands of mercenaries. These could be Numidians, Iberians, Ligurians, Gauls, Celtiberians and Italian tribes which fought at varying times on both sides; the shifting alliances between the two major superpowers and the various smaller kingdoms, tribes, mercenary and ethnic groups being very dynamic. This is another useful aspect of this period as it allows you to use lots of the same miniatures (Gallic warbands, numidian light cavalry, Iberian Scutarii etc) for both sides or on their own as independent armies.

My plan is to do a lot of reading up on the period (with Nigel Bagnalls' The Punic Wars: Rome, Carthage and the Struggle for the Mediterranean next on the reading list) while I sort out the dilemma of what figures to use from the extensive variety of ranges available. I already have a rule set picked, which is of course the excellent Impetus. I have been using these rules for games of War of the Roses recently and I think they will work well for games set in the Punic period. There are special rules for Roman line-relief, using pilum and the way that the 'Impetus bonus' works means that you will have to use different tactics depending on whether you have 'Impetuous' or more steady units. The large base sizes mean that whatever scale I go for the units should look impressive.

The Dilemma
So I have my period and my rule set, the problem is I am having a rather difficult time deciding which scale and manufacturer to go for, but I have narrowed it down to three options:

6mm is the scale I originally intended to do this period in. Using Baccus figures I was going to go all out for mass effect with lots of 6mm figures on the 15mm size bases (8cm x 3 or 4cm for heavy infantry). I would have to sacrifice a lot of the detail that distinguishes the various units but the armies would look more like real armies and would suit Impetus' top down approach to the battles. A typical unit of Hastii/Principes having 60 figures on a base but despite the large number of figures it would still be reasonably cheap with a base like this only costing a bit over £3 and bases of skirmishers and other looses order troops costing much less. This would allow me to collect more than the main two armies with enough miniatures to do all the other nationalities that participated in the wars and also collect some of the contemporary Successor forces. However with the prospect of this range (one of Baccus' older ones) being re-sculpted next year and doubts about whether I would find it satisfying to paint large numbers I have some reservations. 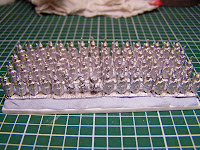 10mm is the compromise scale that would still have some of the mass effect of 6mm but with a bit more detail giving me around 30 Hastati/Principes figures to a base with more variety of poses but 50% more expensive. Magister Militum, have an excellent and large range of figures covering all the various forces with a nice level of detail for the scale and some nice characterful figures for the generals. Though I would have to compromise on just focusing on the main armies, if painted well they should look very good, giving a less generic looking army than 6mm. However I'm not sure whether the extra detail would make up for the loss of mass look. 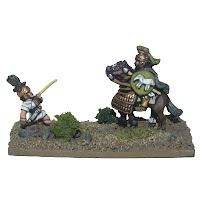 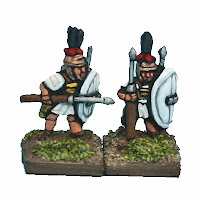 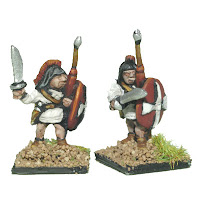 28mm is the scale where any hopes of creating some the 'mass' look go out the window. One of the advantages of 28mm with Impetus' large bases is that you can create some nice diorama type bases with wounded figures or terrain pieces built in. This option appeals to the painter more than the wargamer in me with the chance to have a stunning looking army. Both Gripping Beast and Crusader, plus Armorum & Aquila, have some excellent ranges with a variety of stunning looking transfers for shields that would make the figures look extra special. However this is by far the most expensive option and I would probably have to invest the majority of my hobby budget and painting time into it to get it done to the standard I would want. 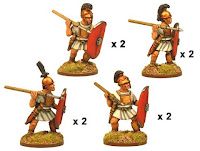 A tricky dilemma but I suppose quite a good one to have; lots of options all with their own pros and cons. I thought I would write this post in the hope that it would help me decide but am finding myself even more torn between the scales, so if anyone has some views or advice especially if you have embarked on a Punic wars project I would be very happy to hear from you. Meanwhile I'll keep painting my Adlers.
T.