Pulp Alley: The Leagues - The International Society of P.O.E.T.s


Having finished painting my third League for Pulp Alley I thought I would post the three leagues along with there stats. One of things I have really enjoyed about this rule set is the flexibility and fun involved in designing the leagues and its been very helpful to see what other people have been doing.

Here the first of the three and is my newest league fresh from the painting table:

Members from the International Society of Paranormal and Occult Extermination Teams (P.O.E.T.s)


This league consists of four "members" all Level 3 Sidekick characters using the League of Legends perk. 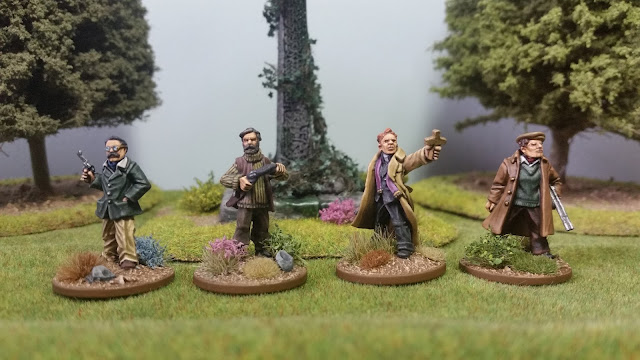 The International Society of P.O.E.T.s is a loose affiliation of "Members" from all walks of life. The only thing that ties them together is that they have all either inadvertently stumbled across the truth or experienced loss at the hands/tentacles of extraordinary horrors lurking behind the thin veneer of an ordinary world. Only the "Founder" of the society; a reclusive and retired wealthy entrepreneur knows the real names and locations of the "Members". When a threat of a Paranormal or Occult nature is identified by the Society's extensive network of spies and informants the appropriate individual "Members" will be contacted by the "Founder" and given their instructions. As such members are only known by their titles or code names. 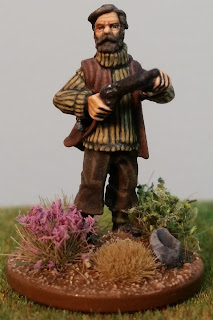 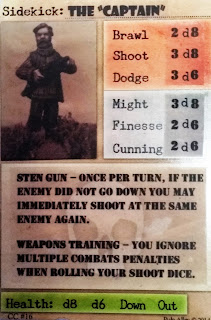 The "Captain"? A military man for sure but Army or Navy? He is an expert with a machine gun and what he lacks in intelligence he makes up for with willpower and athleticism.

It is possible that the "Captain" once lost brave men under his command during a secret mission that went very wrong and very strange, very quickly.......... 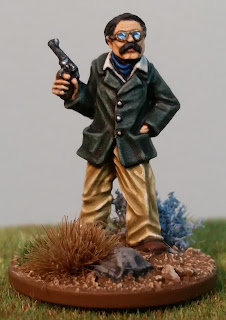 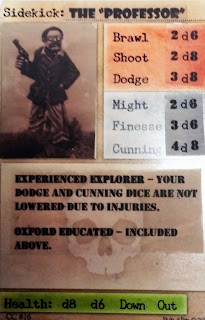 The "Professor"? An Oxford Don perhaps or an eccentric with academic leanings? The most intelligent member of this league and with a few tricks up his sleeve. He is tougher than he looks but he will depend on others for his physical protection.

It is possible that the "Professor" had spent many a late night studying ancient and forbidden books experimenting with complex mathematics when he conjured something he really wished he hadn't............ 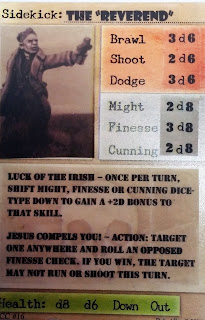 The "Reverend"? A Catholic Priest or does he just find the dog collar comforting when facing unholy horrors? This red haired Irishman will happily trade talking theology with trading blows but lacks the eye for shooting. His charisma is note worthy and he has been known to stop enemies in their tracks with the power of his zeal.

It is possible that the "Reverend"s first Parish in a country parish nestled in a secluded valley was not as he had expected; indeed his God may not have been the only one his Parishioners worshiped.......... 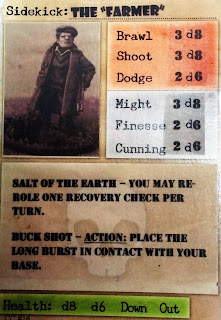 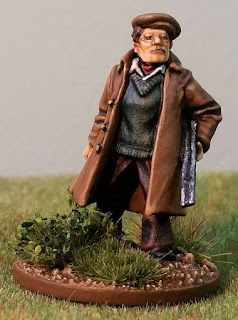 The "Farmer"? A man of soil and toil or something else entirely?
Whatever he grows this man is tough and with his double barreled shotgun loaded with his specially designed "buck" shot he is lethal at close range. The "Farmer" doesn't go down easy but then he isn't the best at dodging bullets either.

It is possible that the "Farmer" once had a loving family in a flourishing small holding but one day he found something growing on his land that no sane person would want to plant.............

I will be adding new characters to this league as I find suitable figures that I want to paint and will create variety. In addition to completing this league I also painted up some extras: 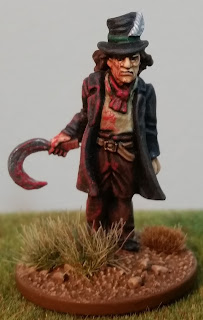 "Top Hat" Jack is an escaped asylum inmate. He has a tendency to wander around graveyards in the dead of night. He has worked as a body snatcher in the past but often succumbed to his urges to commit mutilation and render them useless to the Doctors and medical students he would sell them to.

He will usually be a wandering Peril in my games but may occasionally join the Cult if it satisfies his urges. 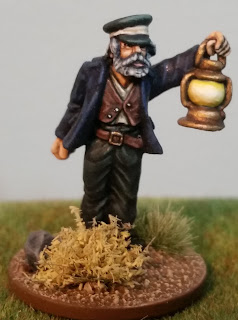 
Next on the painting table is my second "Bad guy" league; Dr Kripps and His Company of Creations which will give my games an element of pulpy weird science.