March of the Austrians (1)

As I mentioned at the end of my last post my next painting endeavour would be to complete 2 regiments/6 battalions/216 figures worth of Austrians to bring them up to strength with the French. Well this post will be the first of a few following my progress and also be a simple guide to how I paint Adler Napoleonics. It will hopefully encourage me to keep going as there are a lot of painting hours going into this but once complete my Napoleonic project should be well on its way to two table worthy forces.
Step 1: I clean the casts; getting rid of flash, mould lines and wash them in soapy water to get rid of casting residue. I think this step is especially important with 6mm as any faults in the casting won't be so easily hidden by a paint job at this scale. Adler figures do tend to have a lot of flash and the occasional casting flaw but do tend to clean up quickly and well.
Step 2: I use PVA glue to attach the strips of 4 or singles if command/casualty figures to lolly sticks, then undercoat them black using several thin coats making sure I get all the nooks and crannies. 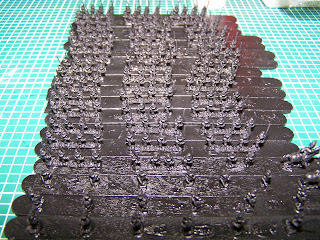 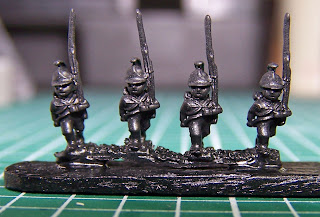 Step 3: I then paint the earth round the feet as this will help with the basing later. As you can see in the picture I have cheated a bit as I had 4 fully painted Austrians left over from my other 2 Regiments so all I have to do is change the colour of their facings and their done (every little helps). 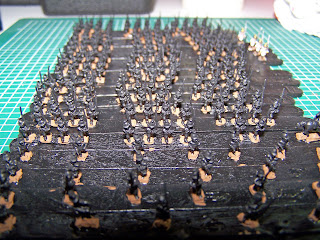 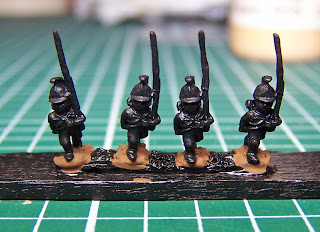 Step 4: I always like to start with the flesh no matter what scale I am painting as it helps to bring the figure alive and encourages me to finish it (can't resist their little faces staring up at me pleading .....paint me..... paint me.... ahem! anyway...). With 6mm figures (especially when you are painting lots of them) it helps to break it down into stages with as few brush strokes as possible and go along the line of figures on your strip and repeat the strokes on each. First I do one cheek with a single 'blob'. 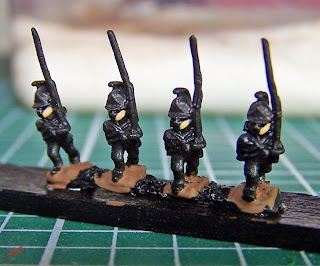 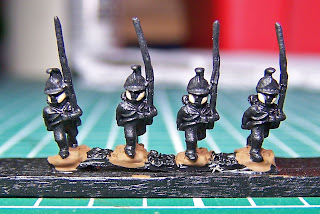 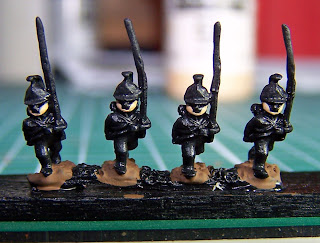 A light dot on the nose, just enough to show its there and a short line underneath for the top lip. 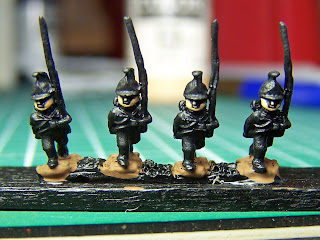 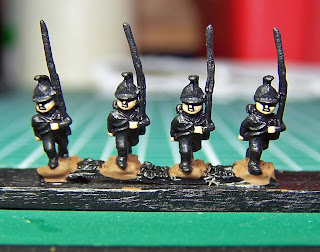 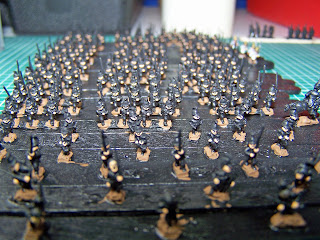 Step 5: Next comes the white trousers. I break this down into a number of strokes that will enable me to get to all the areas that show. This is probably one of the most boring bits to do, no where near as fun as all the straps and things : (. 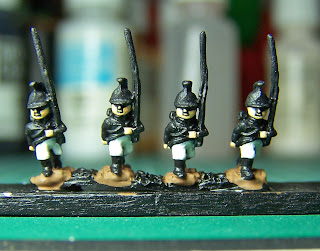 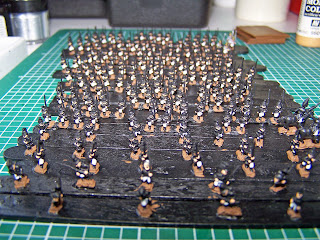 This is as far as I am now, I will endeavour to get as many other steps done and post an update next weekend.
The Impetuous Project
On a separate note, I have had a couple of 500 point games of Impetus now and have to say it is currently my most favourite rule set being both fun, exciting, tactical and historical. As such I am now very keen to collect some 6mm armies for the Punic Wars and have been playing around with ideas on how I want to do my armies. I've now decided to go with the 15mm scale bases giving me a 80mm by 30/40mm base size for heavy infantry. This should give me units of 60 Roman Hastatii/Principe looking a bit like this: 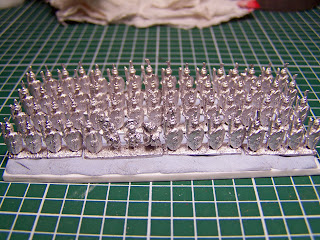 The rule set and base sizes seem ideal for 6mm Mass armies. After ordering some Romans from Baccus I am very pleased with the sculpts. They aren't as detailed as Adler figures but this is actually a strength when I will be having 60 of them to a base. They paint up very will, quite quickly and should look amazing on mass. 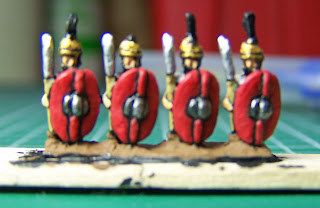 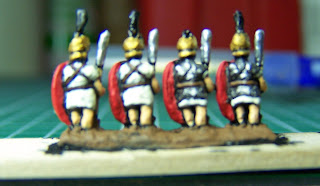 That's it for now. Hopefully more updates from Joe or me soon.
T.
Posted by Miniature Minds at Saturday, May 30, 2009 5 comments:

A long overdue update by me but I thought I should drop in and outline what I'm currently doing hobby-wise and pontificate pointlessly.
The less said about my painting the better I think. I haven't don't too much since my last update, although I have completed a few of my Blood Bowl team. I am having a bit of a crisis of confidence at the moment though because I'm finding it hard to judge when a figure is finished. A part of me will look at a figure and think about adding just one more highlight or just one more glaze, etc. This usually happens when I have spent too long around one project (this BB team has been on the go for about seven or eight months) and I find you lose a bit of perspective.
Despite this, I feel I'm nearing the end on a project that, in the hands of any normal painter, would've been finished months ago! Anyway, must go an browse the Baccus website for my next project...

Haven't posted for a while so I thought I would post some pics of the fruits of my labour from last weekend. First up is a British Riflemen for the Zulu wars from Empress Miniatures. This was a commission given to me by one of the guys at the club (Loughton Strike Force). He is doing Rorke's Drift 1:1 and will be sending this figure off with hundreds of his unpainted comrades to one of those painting companies in Sri Lanka to act as a painting guide. 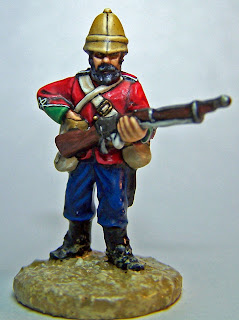 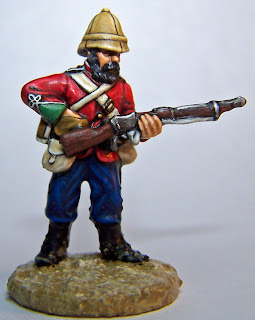 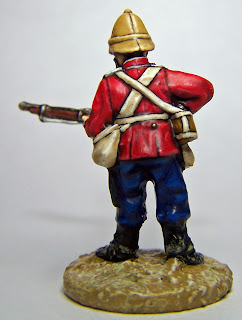 I also based up another French regiment. However they still require some flock, I am waiting for the new small scale flock to arrive from Baccus so I can try this out rather than the longer stuff I normally use. This regiment brings me up to a total of 12 battalions of line, with only three battalions of Legere, a few brigade and divisional commanders, a couple of artillery batteries, skirmishers and a light cavalry regiment to go before my division is complete. 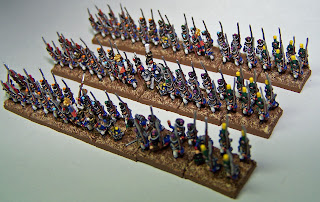 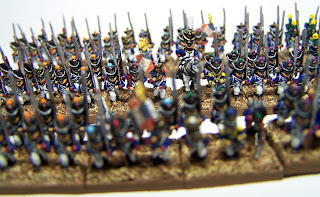 So whats on the painting mat now? Lots and lots of Austrians. I have set myself a bit of a challenge to get a whole brigade of six battalions done in one to catch up with the French. The handy thing with the Austrians however is that apart from command figures they are all identical allowing me to do some speed painting. I will be posting regular updates to keep myself motivated and also to act as step by step guide to how I do my Adlers as requested by David. Heres a pic of all 204 of them ready to go. 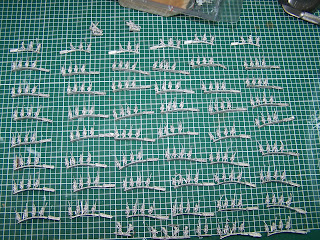 Also look out for a 500 point Impetus battle report in the near future.