Yesterday Joe and I went to Salute, one of the UK's biggest wargames shows and I for one had a really good time. From memories of previous Salutes there seemed to be a few spare spaces where traders would normally be but all the ones I was interested in where there and most traders seemed to have nice little crowds round their stalls so hopefully they did well out of the day. As for demonstration and participation games; the standards seem to be as high as ever, notable games for me where the Assault on Innsmouth game by Gloranthan Army, the Perry's Napoleonic game was very nice and the 6mm Wagram game by Newark Irregulars particularly held my interest. So what did I buy? Well I kept reasonably well to my shopping list only giving-in to some lovely GZG 15mm science fiction figures that they have just released and look suspiciously like these guys:

What I will do with them I am still considering, any suggestions on 15mm sci-fi skirmish games would be most welcome. Pictures of the figures can be seen here. Other than that I purchased two 6mm Baccus War of the Roses armies for Impetus, I also picked up two copies of the rules - one for my good friend who works for the 'Evil Empire'. I got the Town People and Villager packs from the Perry's Samurai Armies range which I need for a little scenario I intend to do once the 6mm is in a playable state and some other bits and bobs.
I was also able to have some enjoyable chats with a number of people and 'interrogate' Michael Perry about the upcoming War of the Roses range (while admiring the 3-ups) and Peter Berry about future releases for Baccus. All in all it was a very enjoyable day and all thanks to the organisational skills of the South London Warlords, thanks guys.

Next post I hope to give a little review of the Impetus rules which look to be very promising.

PS: We would have pictures but we forgot to bring a camera : ( .

Something old, something new...

As it's Wednesday I thought I should post some pictures of what I'm painting at the moment. None of the Blood Bowl Human's are finished and I'm waiting until they are before I post a big team shot. In fact, there is very little difference between what they looked like in my last post to now. Instead I thought I would post a picture of Pippin from the Fellowship boxed set, my current project after the BB figs. Anyone who has painted these figures will know what a joy they are to work on. Brian Nelson's sculpts are pretty much faultless so you really don't have to work too hard to achieve an impressive set of minis. The downside is that they are incredibly detailed and so you'll definitely be using your fine detail brush and a steady hand most of the time. Alongside Pippin is a Night Goblin Warrior from the Battle for Skull Pass boxed set. Now, I'm not sure when I started this figure but it must be over a year ago - he's been almost done for a while - so I decided to just finish him off. As you can see he's pretty much there. He will form part of a 500 point Orc & Goblin Warhammer army which will be one of my next projects - a work-in-progress group shot should be up in the next week or so.

Oh yeah, as with all pictures on this blog you can view the figures in full, unforgiving detail if you click on them. 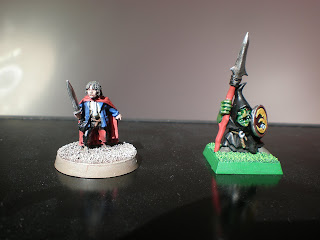 Posted by Miniature Minds at Wednesday, March 25, 2009 No comments:

Labels: citadel, painting, pictures, the lord of the rings

The following are pictures of my main project: 6mm Napoleonics using the General de Brigade rules. So far I have finished nine French line battalions and six Austrian/German battalions with a battery of Austrian artillery. The long term plan is to collect a corps-sized force per side based on Davout's and Rosenberg's commands present at Eggmuhl during the 1809 campaign. At the moment though I'm focusing on getting two playable divisions finished. (Click to enlarge) 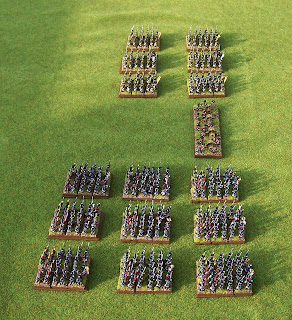 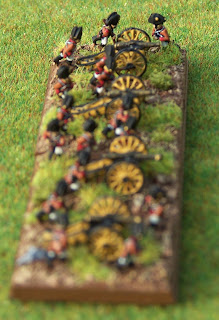 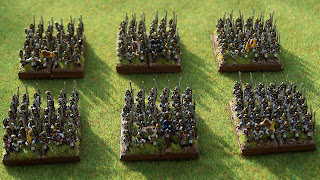 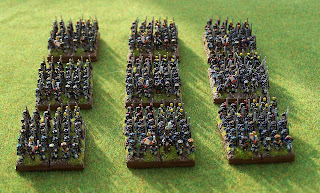 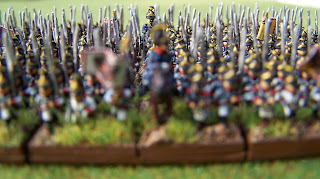 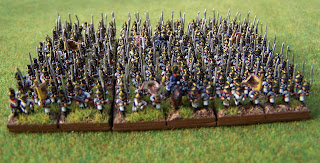 More pictures to follow as I complete other units, bits of terrain and hopefully some battle reports once Joe and I start gaming with the little blighters. Other projects that will hopefully be appearing on the blog soon are more 28mm Samurai, 6mm WOTR and some other bits and bobs including Colonel Schaeffer's Last Chancers that I'm going to paint for sale.
T.
Posted by Miniature Minds at Saturday, March 21, 2009 4 comments:

Haven't posted as many pics as Tom so I thought I'd go some way to putting that right. This is where I'm at with my Human Blood Bowl team (played two, lost two, scored two). As you can see I'm pretty much there, just a few highlighting/shading jobs to be done, a bit of neatening up, bases and transfers and then I will have finished my first proper painting project. My Ogre is still lying in pieces (I haven't even put him together) but I'm going to paint him in tandem with my next main project: The Fellowship of the Ring. Anyway, here are some images... 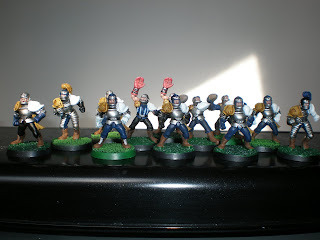 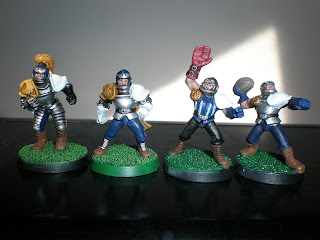 Posted by Miniature Minds at Wednesday, March 18, 2009 No comments:

Yesterday I finished painting my current batch of over 200 Adler 6mm figures for my main wargaming project: Napoleonic 1809 Danube Campaign using the excellent General de Brigade rules (a link to the rules own forum and the Adler Miniatures site can be found in my links). Now they await basing, but before I do this I thought I would post some pictures. (Click to enlarge) 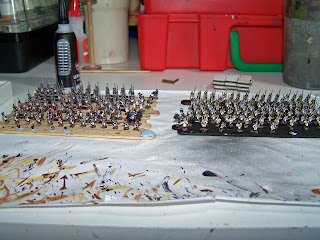 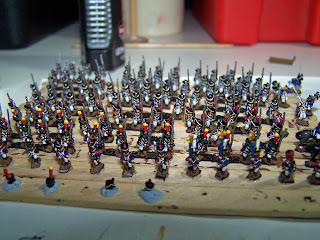 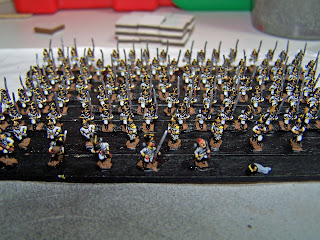 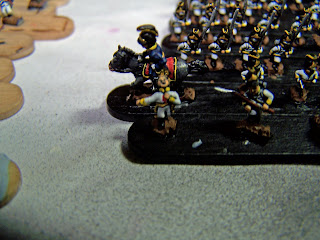 The pictures show one line regiment of French and one Austrian both of three 36 man battalions. With these based and varnished I will have nine French and six Austrian line battalions plus a four gun Austrian battery complete. I will post some pics of the finished articles when these are done, before starting on another 200+ of the little blighters.
T.
Posted by Miniature Minds at Saturday, March 14, 2009 5 comments:

After deciding a new Ogre for my Human BB team was in order I looked around at what was available. eBay has a few classic minis but at ridiculous prices, GW has some newish figures that would fit well into my rather static looking team. In the end I settled on one of Heresy's Deathball figures. They're much more characterful and cheaper than the GW ones, plus you get lots of hand and head options. So I placed my order and the next day it arrived!

So my tip is: if you're stuck for options with regards your BB team and/or fancy something a bit different give Heresy a go, you even get a free packet of sweets.

J
Posted by Miniature Minds at Tuesday, March 10, 2009 No comments:

Work continues apace on The Eagle's Claw even though you wouldn't really notice it to look at them. Am down to the last few details on a few minis and should have some finished to post next week. I had a 'painting revelation' recently when I discovered that Mordian Blue is a perfect highlight for Necron Abyss (both Citadel Foundation). It was one of those satisfying moments where you realise you have to do slightly less work to achieve a great look mini than you first thought. Call me lazy, but mixing has always seemed like too much effort, although the results can be amazing, and I will always try and find a straight colour to highlight or shade the mini before getting my mixing plate out. Despite this though I'm getting a bit 'mix happy' on the Catchers' red gloves (see my first post) and it's looking pretty good.

I was attempting to clean up some Front Rank HYW minis last night. The mould lines on these things are quite strange, they seem to have two: one going from around the mini from left to right and another going from the front to the back. Needless to say it is not an entirely painless process cleaning these figures up, especially for someone as paranoid about mould lines as myself. I have to say I did get slightly frustrated and so I decided to ditch the project for the night and sought refuge by cleaning up a Citadel Skaven Assassin. You know where you are with GW...

Here are the promised pictures of my Blood Bowl Team the Bolog's Brayn Bruzzerz. Bolog's Juze, the company that produces every greenskins favourite light beverage; Bolog's Squig Braynz Juze is the teams sponsor. So far they are doing well having beaten Joe's Human team and drawing with another friend's Halfling team. 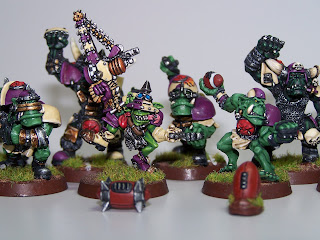 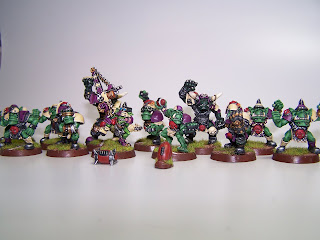 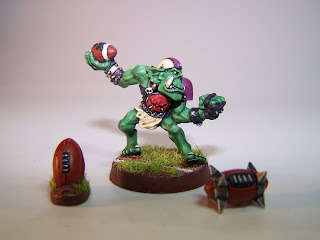 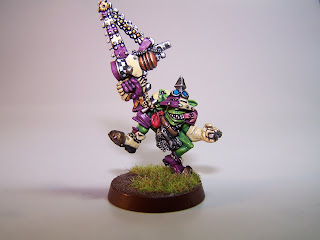 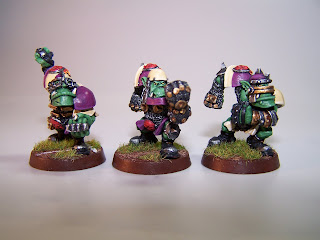 Posted by Miniature Minds at Sunday, March 01, 2009 No comments: